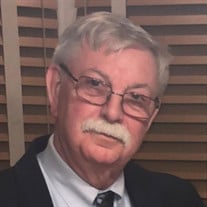 William James Sommerville of New Haven, Michigan passed away on Saturday, January 1, 2022 at the age of 75. After several months of declining health, he passed away as the new year rang in with his wife and granddaughter by his side. William took great pride in his active service in the United States Army. His 26 years in the service led him to meet his wife Petra. They were married in 1967 at Andrews Barracks Chapel in Berlin, Germany. They went on to travel with the Army over the years, staying in Germany on three separate occasions, Florida, California, Maryland where they spent an extended amount of time until they finally found home in New Haven, Michigan. After his time in the service William went on to hold a sales job until he officially retired. He took his role as a grandfather very seriously, always showing his grandchildren love, support, and compassion. He continued his strong role model position with his great grandchildren as well. He never missed an opportunity to spend time with his family. He was an incredible example of a husband and father setting a wonderful path for his grandchildren to follow. William was preceded in death by his sister Frances Sommerville, father Ward Sommerville, mother Caroline Watson (Sommerville), stepfather Edward Watson, and grandson Nicholas Spindler. He is survived by his wife Petra Sommerville of 54 years, daughter Marjorie Colwell (Dean Colwell), daughter Pamela Spindler (Craig Spindler), grandchildren Crystal Tilmon (Donnell Tilmon), William Colwell (Mindi Colwell), Sara Spindler, Tyler Spindler, and five great grandchildren. He has left our homes quieter and our hearts slightly less whole by his passing. A memorial A memorial visitation will be held on Thursday, January 20, 2022 from 11:00am until 1:00pm in the Jowett Funeral Home - 57737 Gratiot, New Haven. Military honors will be conducted at Centennial Cemetery, following the memorial visitation. Arrangements in care of Jowett Funeral Home - New Haven.

William James Sommerville of New Haven, Michigan passed away on Saturday, January 1, 2022 at the age of 75. After several months of declining health, he passed away as the new year rang in with his wife and granddaughter by his side. William... View Obituary & Service Information

The family of William J. Sommerville created this Life Tributes page to make it easy to share your memories.

Send flowers to the Sommerville family.