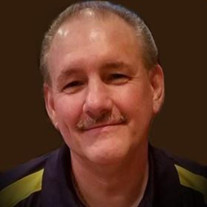 William “Scott” Quant, age 62, of Port Huron, passed away on June 12, 2021 at home with his family by his side. He was born on September 15, 1958 in Port Huron. Scott is survived by his wife, Elizabeth “Liz” Quant; mother, Delores Halliday; father, Howard Quant Jr. (Kathy); brothers; Howard “Joey”(Leslie) Quant, Dan (Kathy) Halliday, John (Wendy) Halliday, Nathan Halliday(Deb); sisters; Debbie (Phil) Bodeis, and Kim Goyette; daughters; Janelle (Rob) May and Courtney (Jim) Jilek; along with 5 grandchildren and 5 great grandchildren; step-daughters; Karen (Carl) Hering, Jennifer Smith, and step-son, Matt Parr; several special nieces and nephews along with many friends and fellow Eagle members. He was a 1976 graduate of Marysville High School. Scott was a wrestler in high school and won many medals. He also won some “Tough Man” contests in the 80’s for which he was recognized and very proud. Because of Scott’s warm and bubbly personality, he was very well liked by everyone that knew him. Scott was a bouncer in a few bars in town and was well respected. He was a member of Eagles #3702 and Moose Lodge #158. He played 40 and over softball for the Eagles and then Good Year. He also played horseshoes at the Office Bar and Moose campground until he became ill. Karaoke was a favorite too. Scott was preceded in death by his step-father, Danny Halliday; and a niece, Serenity Quant Figgens. A memorial service will be at 1:00pm on Thursday, June 17 in Jowett Funeral Home, 1634 Lapeer Avenue, Port Huron. Visiting hours will be from 11am-1pm at the funeral home. Minister Shaun Laurain will officiate. A luncheon will follow at the Eagles, #3702, 2645 Howard Street. Scott would love for everyone to dress casual and wear a “Michigan” shirt. In lieu of flowers, memorial tributes can be made to the Glioblastoma Foundation. Jowett Funeral Home is privileged to assist the family with arrangements. To view the obituary and share memories, please visit www.jowettfuneraldirectors.com

The family of William "Scott" Quant created this Life Tributes page to make it easy to share your memories.

Send flowers to the Quant family.