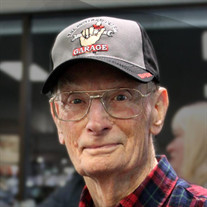 William F. "Chuck" Moore, age 95, of Clinton Twp., passed away on May 19, 2022. He was born on July 5, 1926, in Detroit, to the late George and Ella Moore. He is survived by Muriel, his loving wife of 73 years, by his children; Timothy (Martina) and Colleen Stepien (Robert), as well as four grandchildren; Shaun, Kate, Tony, and Alex and two great-grandchildren Chihiro and Aiko. Bill was a man of strong faith and character who spent his life in service to his family, friends, and especially his church. He was active in a number of volunteer roles at Trinity Lutheran Church from the time the family joined in 1965 until his health prevented him from doing so. He joined the US Navy near the end of WWII, was educated as a gunner's mate and was honorably discharged in 1946 as Seaman First Class. Two years later he married Muriel and shortly afterwards began his lifelong career at Joseph T. Ryerson where he worked his way into a position in the Inside Sales Dept. During that time he attended night school at Lawrence Institute of Technology and earned an Associates Degree in Mechanical Engineering. His specialty became fabrication of complex steel structures of all shapes and sizes. He retired in 1988 after 35 years and was able to pursue his hobby of restoring British sports cars, with countless occasions to come to the aid of family and friends whenever and wherever they needed help, he was truly a "Mr. Fix-it". He also enjoyed fishing with his buddy Jack Brunner and was a competent waterskier, developed through years of family summer vacations on Houghton Lake, still able to slalom ski in his early seventies! A memorial service will be held on Saturday, June 4, 2022 at 11:00am in the Trinity Lutheran Church - 38900 Harper Ave., Clinton Twp., Michigan 48036. Visiting will be from 10:00am until time of service at 11:00am. Memorial contributions may be made to: Hardt-Rathe Scholarship Fund of Trinity Lutheran School of Clinton Township. Arrangements in care of Jowett Funeral Home - New Haven.

The family of William F. "Chuck" Moore created this Life Tributes page to make it easy to share your memories.

Customized sympathy cards. Mailed for you.