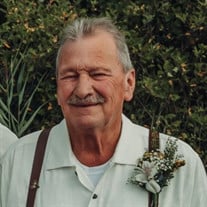 Timothy Lee Fye, age 74 of Marysville, passed away on February 24, 2022, with his family by his side. He was born and raised in Port Huron to William and Ida Mae Fye on March 23, 1947. On October 22, 1966, Tim married his sweetheart, Vicki and served proudly in the United States Army from 1966 to 1968. Being a veteran of the Vietnam War helped to shape Tim into the strong, hardworking and determined person he was. After his time in the service, Tim went to work for At&t as a building mechanic, where he eventually retired with great pride. Tim became a member of the American Legion Post #499 in Marysville along with the Eagles Aerie #3702 in Port Huron. He is survived by his loving wife, Vicki, children, Tim (Melissa), Stacey and Ted; grandchildren, Amanda (Tripp) Hayes, Alexis Bedford, Jessyca and Jenna Fye, Ted and Trever Fye; sisters, Beverly Brieger, Barbara Bowns, Linda Zimmer and Alaine (Jeff) White; brothers, Richard (Kay) Fye and Robert (Jennifer) Fye; sisters-in-law, Josie Fye, Kay Malcolm, Joanne (Steve) Shaw, Elizabeth Zimmer, and brother-in-law, Paul (Stacy) Zimmer. Tim was preceded in death by his daughter, Tracey Lynn, brother, David Fye, sister, Betty Deaner, brothers-in-law, Erich Brieger, Jim Deaner, Ron Zimmer, Bill Zimmer and best friend, Charlie Beals. Our dearest Papa, Dad, husband and friend, it has been proven that no one is replaceable, and everyone is put on this earth for a reason GOD only knows. Tim was an exceptional father figure, grandpa and husband, with a heart of pure gold. No one and nothing got in his way, and anyone would see that from the dedication he had for all aspects of his life. Especially his children, grandchildren and wife. "Forever in our hearts." Cremation arrangements in care of, Jowett Funeral Home, 1634 Lapeer Avenue, Port Huron. Memorial tributes may be made to the wishes of the family. To view the obituary and share memories, please visit www.jowettfuneraldirectors.com

The family of Timothy Lee Fye created this Life Tributes page to make it easy to share your memories.

Timothy Lee Fye, age 74 of Marysville, passed away on February...

Send flowers to the Fye family.