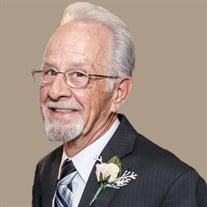 Thomas “Tom” C. Johnson, 78, of Fort Gratiot died peacefully in his home on Tuesday, December 21, 2021, surrounded by his wife and family. Thomas was born in Detroit, Michigan on April 9, 1943 to Elmer “Al” Johnson and Lorraine M. (Lawmaster) Johnson. He was a graduate of L’anse Creuse High School, class of 1961 and went on to graduate from City Barber College in 1963. Tom continued his career as a barber for 48 years and was beloved by all of his clients. He married the love of his life, Mary Ellen (Malo) Johnson on February 11, 1964 at St. Jude Catholic Church in Detroit, Michigan. They went on to have three beautiful children, nine grandchildren, and one great-grandchild. Tom was an avid golfer and bowler. In addition, he also loved boating, wood-working and camping at Washakie. He was loved by all who knew him for his many stories and charismatic personality. There wasn’t a place where he went that he didn’t run into someone that he knew. Tom is survived by his wife of 57 years, Mary Ellen; Children, Thomas S. (Codie) Johnson of Oklahoma City, Oklahoma, Craig (Marlo) Johnson of Wales, Michigan, Shannon (Josh) White of Stanton, Michigan; Grandchildren, Jacqueline (Chad) Kinjorski, Conner (Molly) White, Alexandria (Mason) Barnwell, Megan (Cameron) Oswald, Marissa Johnson, Hannah Miller, Victoria Johnson, Vanessa Johnson, RayAnne Clark; Great-grandchild Eleanor Kinjorski; Brother Dennis (Fran) Johnson; Sister Judith (John) O’Neill. He was preceded in death by his parents Elmer and Lorraine and his brother Terry Jay Johnson. A celebration of life will be scheduled at a later date. Memorial contributions may be made to Blue Water Hospice or the wishes of the family. Arrangements in care of, Jowett Funeral Home, 1634 Lapeer Avenue, Port Huron. To view the obituary and share memories, please visit www.jowettfuneraldirectors.com

The family of Thomas "Tom" C. Johnson created this Life Tributes page to make it easy to share your memories.

Send flowers to the Johnson family.