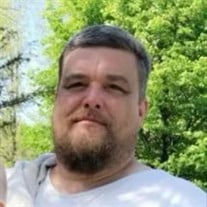 Thomas E. Harmon Jr., age 47, of Cottrellville Township, passed away on December 17, 2021. He was born on February 5, 1974, in Detroit. He married Robyn J. Hojnacki on December 16, 1994. Tom was a very hardworking man, and was very proud of his business, H & K Industrial Group. He took pride in everything he did. He was a loving husband, father, grandfather, son and brother. Tom was very thoughtful and giving to everyone he met. Tom was also a brother, in Freemasonry brotherhood. He is survived by his wife, Robyn, children; Karen Harmon, Megan Bruno, Katelyn Harmon and Savannah Harmon, grandchildren; Destinee Phillips, Mackenzie Hillock, Layla Bruno, Austin Lathan, and one on the way, mother, Norma Harmon, and a sister, Tina Shaw. He was preceded in death by his father, Thomas E. Harmon, Sr. A Celebration of Life will be held at a later date. Arrangements in care of Jowett Funeral Home - New Haven.

The family of Thomas E. Harmon Jr. created this Life Tributes page to make it easy to share your memories.

Send flowers to the Harmon family.