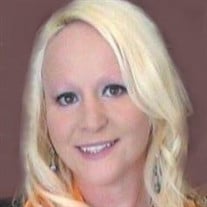 Stacie Lynn Jackson, of Kimball, Michigan, passed away on Friday, August 27, 2021, after a courageous battle with cancer. She was born on August 17, 1980, in Port Huron to William C. (Bill) Jackson of Kimball and Cheryl A. (Cheri) Jackson of Port Huron. Stacie was a 1998 graduate of Port Huron High School and graduated with Honors in 2013 from St. Clair County Community College RN Program. Stacie worked her early years for the Coffee Beanery, Barnes and Noble Café, and ran her own online bookstore. After returning to college to fulfill her lifelong dream, an RN degree, she then worked for Marwood Manor in Port Huron, a profession she cherished. She was a devoted mother to her two precious daughters, Lauren Ivy Harder-Jackson and Ava Lily Jackson-White. They were her joys in life and her reason for living. Stacie is survived by her daughters, Lauren and Ava, father and mother, Bill and Cheri, her loving brother and protector, Ryan M. Jackson (Heidi Wakeham), her trusted and forever friend, Terry Gerstenberger, six aunts and uncles and their spouses, Cindy and Dan Falk, Mike and Lisa White, George and Becky Jackson, Arnold and Sally Jackson, Ronald Jackson and Janet and Steve Murch, thirteen cousins and their spouses along with many extended family members and friends. Stacie was preceded in death by her grandparents, George and Florence Jackson, Robert and Vivienne White, and her aunt, Corrine (Cori) K. Catanzaro. Our Stacie was a bright, determined, fierce, strong willed, loyal, loving person, and like her grandfather, did things “her way.” She is deeply loved and will be sadly missed by all who knew her. Cremation arrangements in care of, Jowett Funeral Home, 1634 Lapeer Avenue, Port Huron. A private family service will be held at a later date per her request. In lieu of flowers, memorial tributes may be made to the Blue Water Area Humane Society or Blue Water Hospice. To view the obituary and share memories, please visit www.jowettfuneraldirectors.com

Stacie Lynn Jackson, of Kimball, Michigan, passed away on Friday, August 27, 2021, after a courageous battle with cancer. She was born on August 17, 1980, in Port Huron to William C. (Bill) Jackson of Kimball and Cheryl A. (Cheri) Jackson of... View Obituary & Service Information

The family of Stacie Lynn Jackson created this Life Tributes page to make it easy to share your memories.

Stacie Lynn Jackson, of Kimball, Michigan, passed away on Friday,...

Send flowers to the Jackson family.