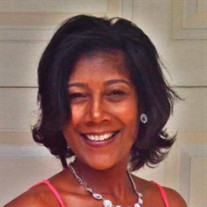 Sandra Rochel Ratliff, aka “Sam” was peacefully called home to be with our Lord on Friday December 17, 2021. She was born on September 28,1969 to the late Margaret “Jean” Ratliff and the late Johnny McCoy. Sandra was the middle daughter of three. Sandra was educated in the New Haven school system and then went on to further her education at Macomb Community College, where she earned an associate degree in Business and Human Resource Management. Sandra held numerous Human Resource positions in her career. She began her journey with Nationwide Fence, where she was an office manager and a part of the Human Resource department. Her most recent held position was at Superior Ambulance, where she held the title of Human Resource Director. During her time at Superior Ambulance, Sandra spear headed numerous projects and was most noted for her involvement with the Air Med Helicopter Rescue and Transport team. Sandra was a committed and dedicated employee who found joy in helping others and changing lives. She worked right up until she became ill and was forced to resign. Sandra dedicated her life to the Lord at an early age. She was a member of Greater New Hope Missionary Baptist Church where she served on the nurse’s guild and helped in any area in which she was called to serve. Sandra never met a stranger and anyone who met her loved her. Sandra had a heart of gold, with a smile which lit up the room. She was outgoing and willing to help anyone she came into contact with. Sandra shared her love for life and talents with the world. Sandra loved her family, shopping, cooking, and trying out new recipes. She cherished her nephews and had a special bond with her niece, Sydney. Sandra’s pride and joy was her baby boy “Wuan”. The mention of his name would brighten her day no matter what was going on in her life at the time. She thought the world of him and was proud of his accomplishments. She enjoyed spending time with him whether it be going out to eat, watching him play basketball or just having heart felt chats. Sandra leaves to cherish in her loving memory her son, Jawuan Montel Doggett, her two sisters, Karen (Charles) Ratliff of New Haven, and Nicole (Louis) Brown of Mount Clemens, her nephews; DeMarco Ratliff, Darius Ratliff, and her niece, Sydney Brown, her Godson, Diallo Champion, her dog, Ruby and a host of aunts, cousins, family and friends who all loved her dearly. Funeral services will be held on Wednesday, December 29, 2021 at 12:00pm in the Greater New Hope Missionary Baptist Church . Family hour will be from 11:00am until time of service. Burial will be in Centennial Cemetery. Visiting hours will be Tuesday, December 28, 2021 from 4:00pm until 8:00pm in the Jowett Funeral Home - 57737 Gratiot, New Haven.

The family of Sandra R. Ratliff created this Life Tributes page to make it easy to share your memories.

Sandra Rochel Ratliff, aka “Sam” was peacefully called home to...

Send flowers to the Ratliff family.