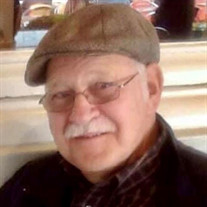 Roland (Rol) Edgar Garland, Jr., 81, died in the company of his loving family. Born in Detroit, Michigan, the eldest of three children. Impossible to categorize, Roland was a gentleman and lovable rascal known for his unique charm, diverse life-long passions and complicated but unmistakable expressions of love. From loving parents of old school ways, Roland along with his two adoring younger sisters (Mary and Evelyn) lived the all-American childhood in a quaint house in Allen Park. Roland thrived in a childhood rich with carefree neighborhood antics, pick-up football games, rescues of homeless dogs (eventual family pet), holidays with sisters and cousins, and trips to the family’s retreat in the Canadian Muskoka’s. Roland’s childhood set the foundation for deep passions which stayed with him throughout his life. Pick up football led to the high school football team (center #50). With a drum set found under the Christmas tree, his love of music also started when he was a teenage boy and stayed with him throughout his life. Always well liked and a natural charmer, Roland was high school class president (1959), before moving on to Eastern Michigan University. With school behind him, Roland took a job with Pan American World Airways when he was in his 20’s. A decision which changed his life forever. The globe now at his doorstep, Roland spent the rest of his life as an avid traveler, traversing the globe many times over with friends and family. Although too many to name, some of Rol’s favorite destinations were Hawaii, Machu Picchu, Cairo, Istanbul, Costa Rica and the Cinque Terre. At 16 Roland met Catherine Vaseau, the demure and beautiful blue-eyed girl every boy had their eye on. Charmed to be sure, they married on August 26, 1961 and had 3 children (Jim, Amy and Colleen). The commitments of work and family intermittently put pause to world travel, so Rol spent time raising his kids, spending summers at family cottages, fishing trips with friends and family and even flower arranging at the family’s flower shop! As time went on, life took the family to Florida, where Rol and Cathy welcomed friends and family in revolving door fashion during the winter and spring months. A defining element in Roland’s life was his love of music, which was deep, passionate and decidedly jazz! Listening to music in a more academic way than most, Roland was endlessly enchanted with the stylings of the jazz masters but none more than that of Thelonious Monk. Roland was never a professional musician, but along with brother in-law Jay, played at every family wedding throughout his adult life. On July 12, 1997 Roland married Suzanne (Jacques). With Sue’s vivacious and easy-to-love nature and Roland nearing the end of his professional career, Roland and Sue traveled extensively with a wide group of fun-loving friends. Spending summers in the Midwest and Canada, Rol and Sue spent the rest of the months discovering and rediscovering locations around the world. When not traveling Rol and Sue spent their time with their beloved children and grandchildren as well as kept-up a healthy regimen of attending local events, activities and general socializing! While Rol at times might prefer to pass on events, Sue’s kindly encouragement to ‘keep up’ helped Roland stay active and involved with his family and wide circle of friends.​ After retirement Roland worked as a volunteer for the Leader Dogs for the Blind, making leather collars and leashes. Rol was also able to pursue his hobbies of wood working and duck carving. Winning many awards with his skills as a duck carver, Roland put forth the same care to build pieces both beautiful and fanciful all lovingly built for and given to his family. His Adirondeck chairs, unique canoe bookcases, basinets, and many other pieces were made with love and are cherished gifts by his loved ones. With a name like Roland, you’re sure to pick-up a nickname or two over the years. Others gave him the nicknames of Rolly, Rol and Rodaddy, but only Roland could provide himself with his own nickname. As his first grandchild was born, Roland proclaimed himself to be “Grumpa”. A nickname that stuck with him for the rest of his life. Roland is survived by his wife Suzanne, former wife Catherine, three children James (Lisa) Garland, Amy (Paul) Bommarito, Colleen (Matt) Krueger, two step-children Matt (Marjo) Grabowski, Gianna Grabowski, grandson Charlie, step grandchildren Paul, Grace, Lucy and Charlie. Roland is also survived by his ever adoring sisters; Mary Loncharich, Evelyn (Jay) Valle and many cousins, nieces and nephews. Roland is preceded in death by his parents Roland Edgar and Mary Ellen (McIntyre) Garland. In lieu of flowers, donations can be made in Roland’s name to the Leader Dogs for the Blind. https://www.leaderdog.org/donate/ A memorial and celebration of life will be held contingent upon the State of Michigan’s COVID-19 protocols. Arrangements in care of Jowett Funeral Home - New Haven.

Roland (Rol) Edgar Garland, Jr., 81, died in the company of his loving family. Born in Detroit, Michigan, the eldest of three children. Impossible to categorize, Roland was a gentleman and lovable rascal known for his unique charm, diverse... View Obituary & Service Information

The family of Roland E. Garland Jr. created this Life Tributes page to make it easy to share your memories.

Send flowers to the Garland family.