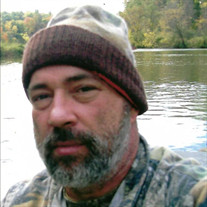 Rodney Casey Hall, passed away peacefully in his home on January 26, 2022 at the age of 60 in Port Huron Township. He was born December 19, 1961 in Mount Clemens. He is preceded in death by his parents, Ira and Elaine Hall; daughter, Christy Rankin-Gilbert; brothers; George Kekhoua, Mike Hall and Pat Hall; sister Jo Redmond and brother-in-law, Gary Redmond Rodney is survived by his loving wife of 27 years, Diane Hall; children; Amy Dafoe (Leroy), Billy Rankin (Brandy), Ryan Rankin (Abby), Shawn Johnson (Danielle), Norman Pecor, Tiffiany Peters(Tony), Brook Hall(Lacey), Travis Hall (Laura); son-in-law, Chris Gilbert and his pride and joy who were his 24 grandchildren; D. J. Stanko, Julia, Maddy, Izzy, and Kennedy Vanhuylenbrouck; Theresa and Levi Dafoe, Allysa and Hannah Post, Rylea Rankin, Violeta, Isaac and Emilia Rankin, Kaedan, Jordan, and Lucy Johnson, Connor, Marshall, and Rosie Peters, Bryce and Blayke Hall, Madison Hall and a 25th one on the way, and Delilah Pecor; great grandchildren; Rodney and Mason Stanko, Brandon Hinojosa; sisters; Sue (Chris) Allen, Abbie Hall, Terri Kekhoua, Pam Flaherty; sister-in-law, Robbin Hall. Rodney served honorably in the United States Army and was a true patriot. He enjoyed many things, including hunting, perfecting his lawn, playing horseshoes, softball, and camping with his wife. Besides the outdoors, he also loved listening to the Sunday morning classics, Elvis, old westerns, John Wayne, surplus store shopping, rooting for the Detroit Lions and Detroit Tigers, and recently became a survival enthusiast. A huge civil war buff. His truest passion, however, was his family. Rodney was a selfless family man who always put his loved ones first. A father figure and role model to many, he left a lasting impression on all who knew him. He was always the life of the party and so welcoming which he made apparent with his warm smile, sense of humor and honest-to-goodness hugs that you never wanted to let go of. The legacy he created will live on through his children and grandchildren thanks to his example of what it means to be family. A celebration of life will be 3pm Sunday, January 30, 2022 at VFW Hall, 1711 Pine Grove Avenue. Memorial tributes can be made to the wishes of the family. Cremation arrangements are in the care of the Jowett Funeral Home, 1634 Lapeer Ave, Port Huron. To view the obituary and share memories, please visit www.jowettfuneraldirectors.com

Rodney Casey Hall, passed away peacefully in his home on January 26, 2022 at the age of 60 in Port Huron Township. He was born December 19, 1961 in Mount Clemens. He is preceded in death by his parents, Ira and Elaine Hall; daughter, Christy... View Obituary & Service Information

The family of Rodney C. Hall created this Life Tributes page to make it easy to share your memories.

Rodney Casey Hall, passed away peacefully in his home on January...

Send flowers to the Hall family.