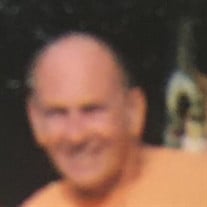 Richard B. Williams, age 79, of New Haven, passed away on April 16, 2022. He was born on August 20, 1942, in Detroit, to the late Loring and Lillian Williams Richard was a huge sports fan, and a die hard Detroit Lions fan. That transitioned to both his sons; Richard and Kevin, as they are both die hard Lions fans, as well. He attended many games with his son, Richard, until his arthritis in his knees prevented him from all the walking involved in going to a game. He loved to shoot pool and was very good even in his later years. In his hey day, he was lights out unbeatable. He was also a very good bowler in his younger days, and loved boating, another past time that transitioned to his children, as they are all boaters. Richard and Craig both have careers in the boating industry. He was a car guy, and was a mechanic at Lange Motors in Detroit, prior to his career on the railroad, as an engineer with Penn Central and later Conrail. His love of cars was something else his sons inherited from him. He had a lot of cool cars growing up, and was recently asked, "What his favorite car was that he owned?" and he said, his 1965 Pontiac Bonneville convertible, no doubt a very cool car! He is survived by his longtime companion of 33 years, Laureen Minx, 4 children; Rick Williams, Kim Maul, Kevin Williams, and Craig Williams, 8 grandchildren; Kevin, Keith, and Kayla Williams, Hunter & Fisher Maul and Devon, Dylan, and Dayle Williams, brother, Ron (Mary) Williams of Texas, and sister, Marilyn Gilmer, and his beloved dog "Sugar". He was preceded in death by his brother, Chuck “Skip” Williams. Services will be held at a later date. Arrangements in care of Jowett Funeral Home - New Haven.

Richard B. Williams, age 79, of New Haven, passed away on April 16, 2022. He was born on August 20, 1942, in Detroit, to the late Loring and Lillian Williams Richard was a huge sports fan, and a die hard Detroit Lions fan. That transitioned... View Obituary & Service Information

The family of Richard B. Williams created this Life Tributes page to make it easy to share your memories.

Send flowers to the Williams family.