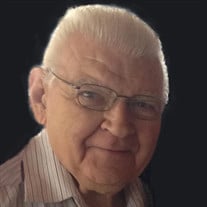 Richard F. Nowaczyk, age 86, of Warren, passed away on May 26, 2021. He was born on February 17, 1935, in Detroit, to the late Frank and Irene Nowaczyk. He married Joan A. Fournier, on August 7, 1954, in Detroit. Richard retired from E&E Engineering. He enjoyed spending time golfing, and was an avid antique car and model train enthusiast. He was a loving husband, father, grandfather and great-grandfather. He is survived by his wife, Joan, children; Cheryl Nowaczyk and Rick (Michele) Nowaczyk, grandchildren; Michael, James, Brian, and Cherie, along with great-grandchildren; Cody and Ella. Richard was preceded in death by his daughter, Sandra Nowaczyk, and grandson, Jimmy. A memorial service will be held at a later date. Arrangements in care of Jowett Funeral Home – 57737 Gratiot, New Haven. Memorial tributes may be made to www.stjude.org/tribute View obituaries and share memories at www.jowettfuneraldirectors.com

The family of Richard F. Nowaczyk created this Life Tributes page to make it easy to share your memories.

Send flowers to the Nowaczyk family.