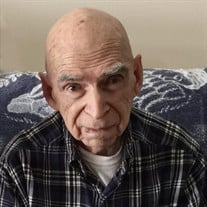 Richard J. Bringard, Jr. died on 10/26/2021, at the age of 90, with his daughter and son by his side at McLaren Hospital. Richard was born in East Detroit on April 5, 1931, to Richard J. Bringard, Sr. and Catherine Mary (Pitre) Bringard. Richard’s family moved to Croswell when he was a child. He graduated from Croswell/Lexington High School in 1949. While in high school, he excelled in baseball, football and track and was elected class president in his senior year. He then entered the U.S. Navy in 1952 and was stationed in Guantanamo, Cuba. While in the service Richard met his wife, Mary Ruth (Stocks) whom he married on August 2, 1952, in Washington, D.C. After being honorably discharged, Richard and Mary returned to Michigan. Mary predeceased Richard on July 2, 2019. They were married one month short of 67 years. Richard began his career as a union electrician, Local 58, and lived and worked in Michigan until his retirement. Richard and Mary loved to travel and were full time RVers for over 5 years before eventually settling in Leesburg, Florida. While living in Florida, he loved to surf fish, play bingo, build beautiful dollhouses, work in his yard and visit with his family and friends. Feeling the need for assistance, Richard and Mary moved back to Michigan in 2016 to be closer to their daughter. Richard was a resident at Mercy Village from 2019 until his death. Prior to the pandemic, he loved going to the dining room to meet his friends for dinner, playing bingo, visiting with the residents in the sunroom and lobby sitting area and going for walks and outings with his caretakers and family. Richard loved his family and attended school functions and took them on many camping vacations from Quebec to Florida and every state in between. He was a superb role model and passed on his passion for travel, his work ethic, integrity, sound advice and his love for his country and God. He made many friends throughout his life and could always be found sitting on a bench or chair talking to those who sat next to him. Richard will be sorely missed by his daughter, Sharon, and her husband, Larry Burns; his son, John, and his wife Celeste; six grandchildren, Jennifer (Eric Lange), Justin, Jermy (Elizabeth), Michael, Amanda (Alex Maskovyak), Melinda (John Gardiner) and 5 great grandchildren. He is also survived by his brother, Herbert (Joyce) Bringard, Daughter-in-Law, Heather Bringard and many cousins, nieces and nephews. He was preceded in death by his parents, his son Richard J. Bringard, III, his sister Jean Irwin, and two infant sisters. A special thank you to his “Ladies” Angela, Laurie, Becky and Chelsea for all the love and extra special care they gave Richard during his stay at Mercy Village. His life was made richer due to the daily attention he received from these earthly angels. The family would also like to thank the 5 North staff and McLaren Hospice at McLaren Hospital for the exceptional care and kindness extended to Richard and his family during his recent stay. At his request, there will be no funeral. Richard was cremated and he, along with his wife, will be interned at Florida National Cemetery in Bushnell, Florida at a later date. Memorials can be made in his name to McLaren Hospice and Homecare Foundation, 1515 Cal Drive, Davison, MI. 48423. Cremation arrangements in care of, Jowett Funeral Home, 1634 Lapeer Avenue, Port Huron. To view the obituary and share memories, please visit www.jowettfuneraldirectors.com

The family of Richard J. Bringard created this Life Tributes page to make it easy to share your memories.

Send flowers to the Bringard family.