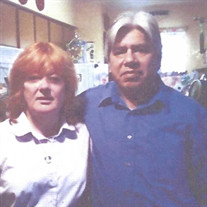 Norberto “Bob” Barron Jr., (BadBob, BertBarr, Bandana Bob) age 66, of Port Huron, went peacefully home with his Savior on April 1, 2022. He served honorably in the United States Army. Bob was very loved and will always be missed by everyone who knew him. He had a personality like no other, always putting a smile on someone’s face no matter what kind of day they had. Bob always had his friends and family laughing at his jokes. Even complete strangers enjoyed talking to him. Bob truly was a rock for a lot of people in his life, a Christian man who knew the bible like the back of his hand. He loved playing pool, playing cards such as euchre, monopoly, watching football and food; as he was always hungry. Candy was his favorite thing to snack on while he drank his Coca Cola. His wife Peg would send him to the store with a list and he come back with everything on it and then some. Bob loved watching tv the most. If he wasn’t watching an Action movie, he was watching the news and always praying for his favorite president, Donald J. Trump, to be in the White House once again, and create a better Country for him and his family like Trump did before. Bob would even wear his wife’s Trump hat to show how much he supported him. Bob and Peg met 25 years ago and were a match made in heaven. He always loved her and did everything he could for her. Bob always made sure to clean up around the house while he let her rest. They would joke and laugh, and even loved to dance together. Peg would even sing a song to him that she made. He always had the biggest smile when she would sing “I don’t know and I don’t care, I love Bobby better bare.” They were very much in love and you would never see them without one another. Bob also loved music. He would always call his stepdaughter, DeAnn, to be his DJ and play any song he asked for. Sometimes he would have DeAnn skip to the next song even when it was getting to the good part. She would always have and say “Man always at the good parts!” They would laugh and move on to the next song. Bob called DeAnn his “girly girl.” Everywhere Bob went, he always had a sidekick, his stepson John. They would go to the store and get things for the house, or to the gun shop to check out guns together and talk about what ones were the best for your buck. John loved and enjoyed spending time with his hero and didn’t mind being the sidekick. Now older and without his hero here, John will become the hero that Bob once was. Bob enjoyed life and had many dreams and goals to fulfill in his time on earth, but he was called into Heaven for a bigger mission that God had planned for him. He would want his family to enjoy his memory and talk about all the good times spent together. He was an amazing man and one day we will all see him again in the House of the Lord. We know he is in Heaven smiling down towards the ones he loves and cares for. Bob will never be forgotten, but will always be missed. Bob is survived by his wife, Peggy Stockwell, stepchildren, DeAnn Stockwell and John Stockwell, step father to Kris, Ann, Andrew, their spouses and kids; 5 children, Josiah, Elijah, Mathew, Christiana, Rachel and Samuel; sister and brother-in-law, Mary (Jessie) Hernandez, sister and brother-in-law, Yolanda (Doug) Stewart, sister, Betty Gonzales, sister, Iris Barron, sister and brother-in-law, Carol (Jeff) Kahl, brother and sister-in-law, Richard (Jessica) Barron and brother, Ignacio Barron along with several nieces, nephews, cousins and extended family members. His favorite nephew was Junior Barron. He was preceded in death by his parents, Norberto Barron Sr. and Gloria Barron, brothers, Joseph Hernandez and Christopher Barron. Cremation arrangements in care of, Jowett Funeral Home, 1634 Lapeer Avenue, Port Huron. To view the obituary and share memories, please visit www.jowettfuneraldirectors.com

The family of Norberto "Bob" Barron Jr. created this Life Tributes page to make it easy to share your memories.

Send flowers to the Barron family.