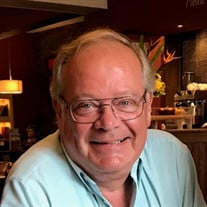 Scheuer, Michael John Albion Holden, age 70 years, died Friday, February 11, 2022, after a seven-month battle with pancreatic cancer. Michael was born on November 20, 1951 in Detroit, Michigan to Lawrence Joseph Scheuer and his wife, Annie Irene Holden. His parents predeceased him in 1999 and 1975 respectively. He is survived by his loving wife of 28 years, the former Corinne Evans Laurie. Also surviving are his two brothers, Lawrence Scheuer (Diane) of Wilmington, Delaware and William Scheuer (the late Carol Anderson) of Scarborough, Ontario, Canada, plus brother-in-law Robert Evans (Ellen) of Xenia, Ohio. Also surviving are his nephew Kevin Scheuer of Wilmington, Delaware; niece Karen Scheuer of New Castle, Delaware; nephew Timothy Scheuer (Ann-Mari) of South Lyon, Michigan and nephew Matthew Scheuer (Brenda) of Corona, California; nephew William Kevin Miller of Las Vegas, Nevada, plus three grandnieces, one great grandnephew, goddaughter, Heather Scheuer Hester (Max) of Chicago, Illinois, godson David Shultz of Atlanta, Michigan and lastly, Henry, the 16 year old kitty whose antics made Mike laugh daily. Mike graduated from Bishop Gallagher High School, Harper Woods, Michigan in 1969 then attended Wayne State University, Detroit. Thereafter, he worked for Detroit Civil Service in the Street and Traffic department, Birth and Death records, City Planning Division, and the Water Department. He also began frequent, intermittent and extensive travel throughout Britain and Western Europe and worked in his parents‘ retail ice cream business. No doubt these years solidified Mike’s life-long interest in genealogical studies. He authored many print and on-line articles about genealogy and specific family and local historical locations. He was associated with various English, Scottish, Irish, German, and Belgian/Flemish ethnic genealogist organizations in Michigan and abroad. Michael began employment with Michigan Bell Telephone Company in 1977, as well as career long work with the Communications Workers of America (CWA). For just under twenty-five years, Mike held elected officer positions in three separate CWA organizations in Southeast Michigan. He edited and authored some Local’s newsletters and won several national awards from the CWA International Union. Rheumatoid arthritis brought about Mike’s required full retirement in 2002. Corinne had retired in 1999 and had successful open-heart surgery in 2003. They were able to travel often, mainly to locations throughout Europe, England, Scotland, Ireland, and across the U.S. and Canada. They were often able to host extended family and friends, especially when they moved from their home in Roseville in February of 2006, to their new home a few miles away in Lenox Township. In 2019, they willingly accepted caregiving responsibilities for Mike’s older brother, William, pursuant to Bill’s cancer diagnosis, with its international health care treatment challenges and, of course, COVID-19. Mike was also survived by (and sadly, was predeceased by) some cousins of varying degrees of relativity and affinity (here and abroad) upon whom Mike and Corinne relied on and they were never disappointed. There were also other surviving family; “extra family”. Mike was and is survived by the loving, and ever-extending family of Charles Schmidt, DDS and his wife Susan. Mike was grateful to be accepted as an extra son, grandson, nephew, brother-in-law, uncle et al. There was/is, another beloved extra family too; the Joseph and Millie Kreummer family, which Mike inherited through Corinne. As the world calms down this year, there will be a “Celebration of Life” somewhere locally in Southeast Michigan for immunized guests. Future plans to be announced. Let’s laugh and love each other in the meantime. Mike’s final message to everyone: Share a memory or a joke. Be nice to someone who can sometimes not always be nice. (To quote Irene Scheuer, “It’s easy to be nice to nice people”) . Enjoy some good music. Sing along if you can. Be nice to animals. Behave yourselves... for the most part. “Uncle” Mikey sends his love. I will go ahead to scope things out for us. In lieu of flowers, please donate to the Michigan Humane Society or an animal shelter of your choice. Cremation services being provided by Jowett Funeral Home of New Haven.

The family of Michael J. Scheuer created this Life Tributes page to make it easy to share your memories.

Send flowers to the Scheuer family.