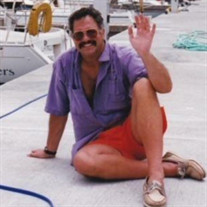 It is with profound sadness and heartache that we announce the unexpected passing of Dr. Mark Dennis Sauvé, who died peacefully in his sleep. Loving husband of 40 years to Penny, beloved son of J. Edouard and the late Kathleen Sauvé, brother of Gretchen (Robert), Matthew (Mary), Luke (Marj), and John (Ann). He leaves behind nieces Michelle, Christine, Emma , Kate, Jaymee and Farrah; nephews Phillip, Andrew, Jason, Jay and John; several cousins; and many loved ones who thought of him as their brother or uncle. He also leaves behind countless friends from every stage of his life. Mark earned his undergraduate degree from Central Michigan University and graduated from the University of Detroit Dental School in 1978. He maintained a popular dental practice at Apple Dental in Clinton Township for 30 years. Both patients and staff became Mark’s friends. Raised near Lake St. Clair, Mark and his siblings enjoyed sailing in the summer and ice skating in the winter on the lake. His love of boating, sailing, and all things nautical was lifelong. When he and Penny married, they bought a house on the lake and entertained friends and family at their home and on their boat Sundogs, named for the number of yellow Labradors they lovingly cared for over the years. The dogs frequently went out for breakfast with Mark and accompanied him and Penny on road trips to visit family in West Virginia and Maryland. Current sundogs Larry and Sarah will miss him dearly. Mark was curious, fun-loving, and always up for adventures, whether close to home on his beloved Lake St. Clair or farther away. During a sight-seeing and safari trip to Kenya , Mark fixed the broken-down truck’s carburetor throttle with dental floss. He and Penny frequently visited their nieces and nephews, whether biological or honorary, at college and often brought a sundog or two along for the drive. In later years, Mark enjoyed frequent vacations in Mexico with Penny and in-laws John and Julie Potter. Closer to home, Mark and Penny were involved with fundraisers and animal adoptions for GPAAS (Grosse Pointe Animal Adoption Society). When Mark retired from dentistry after 30 years, he began a second career of sorts, serving as his family and friends’ resident technology expert, boating and sailing instructor, master of ceremonies for parties and fundraisers, and chauffeur. He was always ready to help anyone in need, and his family and friends were blessed to be able to rely on him. While Mark was often the tallest guy in the room, he also radiated a sense of childlike playfulness, whether accompanying nieces and nephews to school events, celebrating Halloween with elaborate costumes, or pursuing new hobbies. Mark’s witticisms and generosity will be missed by all who knew him. His family and friends will remember his gentle mentoring, sense of humor, and ever-present smile. In lieu of flowers donations to Grosse Pointe Animal Adoption Society (GPAAS) www.gpaas.org or 296 Chalfonte Ave. Grosse Pointe Farms , MI 48236 will be greatly appreciated. A funeral mass will be held on October 23, 2021 in St. Michael's Catholic Church - 40501 Hayes, Sterling Heights. Visiting will be from 9:00am until time of mass. Arrangements in care of Jowett Funeral Home - New Haven.

It is with profound sadness and heartache that we announce the unexpected passing of Dr. Mark Dennis Sauvé, who died peacefully in his sleep. Loving husband of 40 years to Penny, beloved son of J. Edouard and the late Kathleen Sauvé, brother... View Obituary & Service Information

The family of Dr. Mark D. Sauve created this Life Tributes page to make it easy to share your memories.

It is with profound sadness and heartache that we announce the...