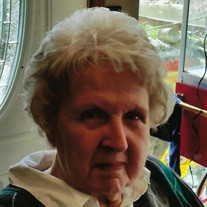 Marilyn R. Ochenski, age 85, of New Haven, passed away on December 8, 2021. She was born on April 21, 1936, in St. Clair Shores, to the late Frederick and Ruth Kaake. She married Robert E. Ochenski on June 4, 1953. He preceded her in death on December 23, 2011. Marilyn was a member of the Lenox-New Haven Historical Society, and was an active volunteer at the Grand Trunk Railroad Depot, in New Haven. She was a huge animal lover and enjoyed spending time with her family and friends. She is survived by her children; Kim Elise (Michael Stern) Yonaka, Michael Ochenski and Deborah Ann (Alan) Shagena, grandchildren; Jennifer Shagena, Alan Shagena, Jamie Lynn Zelnock, and Stacey Lee Germez, 5 great grandchildren, brother, William (Donna) Kaake, along with several nieces and nephews. She was preceded in death by her son, Robert Frederick Ochenski. Funeral services will be held on Friday, December 17, 2021 at 5:00pm in the Jowett Funeral Home - 57737 Gratiot, New Haven. Visiting hours will be from 2:00pm until time of service. Memorial contributions can be made to the wishes of the family.

The family of Marilyn R. Ochenski created this Life Tributes page to make it easy to share your memories.

Send flowers to the Ochenski family.