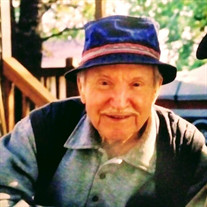 Luthard Nathanael Eid was born in Madison, MN on February 29th, 1916 and passed away peacefully at the age of 105 on January 2nd, 2022 at home, surrounded by his loving family. The 4th of 10 children born to Lutheran pastor Edward Eid and Jessie Waller Eid, he was named after a German theologian, Luthardt. He grew up in Boyd, MN and Lake Preston, SD. In the summer of 1934 he entered the Civilian Conservation Corps, and served for six months in the Black Hills of SD, trimming trees and living in tents and barracks. His father arranged for him to attend the spring term at Lutheran Bible School in Minneapolis. Luthard valued education. He went on to earn a Bachelor of Arts degree from Augustana College, a Bachelor of Theology degree from Luther Theological Seminary, a Master of Arts from Brown University, and a Master of Theology from Princeton Theological Seminary. He loved to read and study, and even read the entire encyclopedia. While attending Luther Seminary, Luthard interned at Central Lutheran Church in Portland, Oregon. Upon graduation he pastored a small church in Providence, Rhode Island and attended Brown University at the same time. He fell in love with Vera Johnson and asked her to marry him and go to China with him as a missionary. Luthard and Vera received language training in Mandarin and ministered in China from 1946 to 1949 when they had to leave due to the communist revolution. Back in the USA, Vera and their children stayed with her parents while Luthard studied at Princeton and in Germany. Luthard also visited the Holy Land, Rome, and Paris. Upon his return, the family spent the winter of 1951-52 in Northfield, MN, from where Luthard went on deputation trips. In 1952 Luthard was called to Hong Kong to teach at Lutheran Theological Seminary, conducting his classes in Mandarin. He also preached at Chinese churches, and took on many additional projects and responsibilities, including assisting in the opening of schools, serving as Treasurer of the Seminary, Chairman of the Mission, Chairman of the Middle School Board, Chairman of the Lutheran World Service, Vice President of the ELCA of Hong Kong, and, using his skills with written Chinese, did translation work. He developed many deep relationships with his Chinese fellow laborers for Christ. Although he was very busy, he always made time for his family. In 1975 Luthard and Vera returned to the United States where he pastored two churches in South Dakota until his retirement in 1980. He and Vera purchased a small lake home and enjoyed country life for 15 years before moving to Perham, MN. Luthard found time in retirement to pursue his passions and learn new things. He made beautiful wooden stools and plaques with Chinese characters on them, and gave these as gifts. He wrote letters and kept in touch with many friends from around the globe through the years. In 2015 his beloved Vera passed away, and he moved to Port Huron, MI to live with his daughter and son-in-law. Luthard loved God, and all people. He had a great enthusiasm for life, and had many interests, including theology, philosophy, astronomy, fishing, croquet, cooking, and bird watching. Luthard wrote several books and many poems, and encouraged others to write. Active all his life, he enjoyed many sports, including being a lifeguard and diver in high school and playing tennis most of his life. He walked daily in his older years. Luthard was a great storyteller, with an amazing memory and great sense of humor. He had a beautiful singing voice. He was generous and loved to help people. He had an attitude of gratitude and joy. He was a man of faith, hope, and love. Luthard was greatly loved, and will be greatly missed. Luthard was preceded in death by his parents, Edward Eid and Jessie Eid, by his nine siblings, and by his beloved wife, Vera. Also, his son-in-law Don Cameron, and several nieces and nephews. He is survived by his sister-in-law Lois Eid, and his six children and spouses, Kathy (Doug) Burnell, Pauline Cameron, Daniel Eid, Marj (Sam) Overstreet, Marion (Brian) Dietz, and Karl Eid. Also, 15 grandchildren, 14 great-grandchildren, and many nieces and nephews. Luthard’s memorial service will be held in Minnesota in the summer. Donations in his memory may be sent to Lutheran World Relief or the charity of your choice. Cremation arrangements in care of, Jowett Funeral Home, 1634 Lapeer Avenue, Port Huron. To view the obituary and share memories, please visit www.jowettfuneraldirectors.com

Luthard Nathanael Eid was born in Madison, MN on February 29th, 1916 and passed away peacefully at the age of 105 on January 2nd, 2022 at home, surrounded by his loving family. The 4th of 10 children born to Lutheran pastor Edward Eid and Jessie... View Obituary & Service Information

The family of Luthard Nathanael Eid created this Life Tributes page to make it easy to share your memories.

Send flowers to the Eid family.