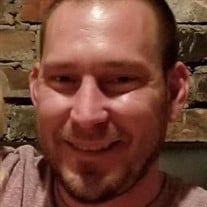 Kyle Patrick Marshall, age 41 of Redford, formerly of Port Huron, died unexpectedly on April 25, 2022. He is survived by his parents Ilene Marshall and Jerry (Sue) Marshall of Port Huron, Lindsey Marshall of Northville, two sisters Kerri (Todd) Birtles and Kristin (David) Roberts all of Port Huron. He is further survived by many nieces and nephews; Zachary (Lyric) Birtles, Laney Roberts, Austin Birtles, Brady Roberts, Kailey Birtles, Hannah Monzo, Brendan Relken, Leah Catalanotte, Genevieve Relken, Avery Catalanotte, Dylan Relken, Liam Zablocki, a great nephew Jayce Birtles and soon to be great niece Heartlin Birtles. He is preceded in death by his beloved dogs Kennedy, Abby and Ellie. Kyle was born October 17, 1980 in Port Huron. He graduated from Port Huron Northern in 1999 and from St Clair County Community College in 2001. He moved to Redford in 2002 to pursue a career at TRW. Kyle married Lindsey Relken on July 7, 2007. Kyle worked at ZF in Farmington Hills, formerly TRW, for 20 years. At ZF Kyle made an incredible friend group with whom he made many memories and who he considered his close friends. One of his favorite things to do there was break stuff and organize the Chili Club. Kyle enjoyed traveling, hiking, and playing poker. He also volunteered for many years handing out programs at Detroit Red Wings Games. Kyle was most happy being around family and adored his nieces and nephews, oftentimes playing and rough housing with them like he was one of the kids. Kyle will be remembered for his kindness, his sense of humor, and for being a little too loud. He will be missed by everyone whose life he touched. Funeral services will be 2:00pm Monday, May 2, 2022 in the Jowett Funeral Home, 1634 Lapeer Avenue, Port Huron. Minister Scott Pike will officiate. Visiting hours will be from 11:00am until the time of service at 2:00pm in the funeral home. Memorial tributes can be made to Blue Water Area Humane Society or J.D.R.F. To view the obituary and share memories, please visit www.jowettfuneraldirectors.com

The family of Kyle Patrick Marshall created this Life Tributes page to make it easy to share your memories.

Send flowers to the Marshall family.