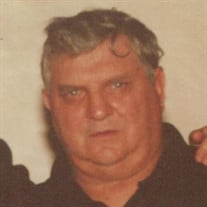 Kenneth A. LaLonde, age 82, of Marine City, passed away on March 18, 2022. He was born on August 21, 1939, in Cheyboygan, to the late Frederick and Mary LaLonde. He married Ruby M. Pierce on September 26, 1959. Ken was a retired machinist, who enjoyed tinkering with motors and small engines. He was a loving, husband, father, grandfather, great grandfather and brother. He is survived by his wife, Ruby, children; Kenny, Barbara, Mark, Patrick, Joeylynn, and Christopher, 12 grandchildren, 10 great grandchildren and one on the way, twin brother, Keith, and sisters; Shirley, Della and Beverly, along with several nieces and nephews. He was preceded in death by his siblings; Larry, Rodney, Fred and Barbara. Services will be private. Arrangements in care of Jowett Funeral Home - New Haven.

The family of Kenneth A. LaLonde created this Life Tributes page to make it easy to share your memories.

Kenneth A. LaLonde, age 82, of Marine City, passed away on March...

Send flowers to the LaLonde family.