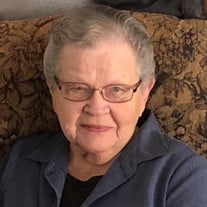 Kathleen E. French, age 83, of Smiths Creek, passed away on October 20, 2021. She was born on March 23, 1938 in Port Huron to the late Earl and Hazel Bowns. Kathleen married Eldon E. French on April 3, 1959 in Port Huron who preceded her in death on December 19, 2019. Kathleen was proud of her 63 years of service at Mueller Brass, working full time until age 79. She made her home with husband Eldon, (Gene)in Kimball Township, where they raised their children, Rod and Lori, spent quality time with relatives and kept a vast garden. Kathleen was a great bowler, competing in league regularly with her sister Janet and friends from work. She enjoyed playing cards, camping, boating, snowmobiling, country music and was a great admirer of Michigan lighthouses and the freighters that passed through the St. Clair River. Kathleen loved traveling around Michigan to see her grandkids play hockey and perform music and ballet. She is survived by her 2 children; Rodney E. French of Port Huron and Lori Anderson of Sault Ste Marie; 3 grandchildren; Devin, Noah, and Hope Anderson; many nieces, nephews, cousins, and friends; sister-in-laws; Delma Ward and Helen Myers. Kathleen was preceded in death by her sister and best friend Janet Rich. Funeral services will be at 12:00pm, Monday, October 25, 2021 in Jowett Funeral Home, 1634 Lapeer Avenue, Port Huron. Minister Shaun Laurain will officiate. Burial will be in Woodland Cemetery. Visiting hours will be from 10:00am until 12:00pm. Pallbearers are Devin Anderson, Noah Anderson, William Rich Jr., Michael Ward, Dwight French, Walter “Buck” French. Jowett Funeral Home is privileged to assist the family with arrangements. A luncheon will follow the service in the Jowett Funeral Home Reception Center. Memorial tributes can be made to Chippewa County Sunshine Rotary Club. To view the obituary and share memories, please visit www.jowettfuneraldirectors.com

The family of Kathleen E. French created this Life Tributes page to make it easy to share your memories.

Send flowers to the French family.