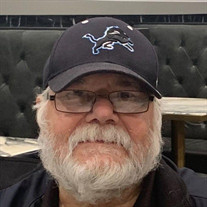 John C. Wartian, age 76. of Clinton Twp., passed away on December 25, 2021. He was born on January 13, 1945, in Detroit, to the late George and Mary Wartian. He married Joan Alcamo on October 25, 1971. John was very active with The Gideons International and his church. He was a volunteer and mentor at Teen Challenge, in Detroit. John retired after 44 years, from General Dynamics Land Systems. He enjoyed going up north, fishing and spending time with family and his grandchildren. He is survived by his wife, Joan, daughter, Dawn ( the late Keith) Nummer, son, John (Lillita) Wartian, granddaughter. Michelle (Matt) Wartian, grandson, Nathanael Wartian, and his mother, Joy Wartian, siblings; Loretta (the late Robert) Banek, Mary (the late Louis) Selzer and George (Joyce) Wartian, and nieces and nephews. A memorial service will be held at a later date. Arrangements in care of Jowett Funeral Home - New Haven.

The family of John C. Wartian created this Life Tributes page to make it easy to share your memories.

Send flowers to the Wartian family.