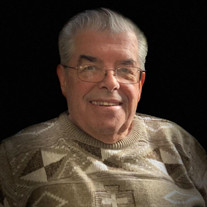 John (Jack) Feehan is at peace at age 76. He passed away September 29th, 2021, at Blue Water Lodge. He is survived by his loving wife, Geraldine (Geri) who he has been married to for 46 years. Jack will be greatly missed by his family, including his children Theresa Saigh, Amelie Clutts (David), and Brian Eskelinen (Kerilyn). His siblings Kay Hoekstra, Mary Solomon (Larry), Michael Feehan (Valerie), and Deborah Zerbo (Rick). Jack also had 6 grandchildren, who he cherished: Mallory Saigh, Alisha Saigh, Rachel Saigh, Jenna Saigh, Noah Eskelinen, and Sydnie Eskelinen. He also had many nieces and nephews, and great nieces and nephews. Jack will also be missed by so many people who were touched by his generosity and kindness. He left an impression on everyone he met. Jack was proudest of his family, but he also took great pride in his job and in the time that he served in the National Guard. Jack worked at Chrysler for 36 years and retired as a Tool Engineer. He was a dedicated worker and received recognition for his many years as a loyal employee. He was a devoted employee and patriot and supported his co-workers and country with his loyalty. Jack was always looking out for the underdog. He created opportunities for his fellow workers in his role as a Union Steward at Chrysler. His goal was to create positive change and equal rights for all. Prior to retiring, Jack took up bicycling as a new hobby. He spent his next 25 years attending bicycling events including, the Michigander, Blue Water Ramble and many others. He made lasting friendships with people from all over Michigan (and the country) and kept in touch with them via Facebook up until he passed away. Jack felt fortunate that he was able to retire at age 55 so that he could enjoy the rest of his life. He and Geri retired to their beautiful lakefront property in Evart Michigan where they enjoyed a magnificent view every day. Jack spent his time fishing, boating, walking the dog, and taking care of everyone in the neighborhood. He was the person who was called upon whenever anyone needed a hand, and he was always eager to help. He will be remembered for his kind heart. Jack found that he had a love for animals, especially dogs. His first loyal companion was Charlie, who he took on trips for over 13 years. Next came Jake, a loving golden retriever who was with him for 11 years. Jack walked him each day and spoiled him with treats. His next canine friend was a 4-year-old Australian Shephard named Cali. She immediately bonded with Jack and brought him joy every day (she too was spoiled with lots of treats). One of Jack’s favorite things to do was to take the dog to his brother’s house, where the leash could come off and the dog was able to run freely through the trails in the woods. He found great joy in watching them run free. Everyone will miss Jack’s wit, charm, and his love for family and friends. He became a dedicated techy with Facebook communicating with his high school friends, fellow bicyclists, family, and other followers. Along with all the hobbies listed above, Jack enjoyed a good meal. He created his own, “Food for Thought,” where people took pictures of their unique and tasty meals to share with others on-line. Whenever people were trying a new recipe or traveling and had an interesting meal, they would share their experience on “Food for Thought.” Jack wanted his family and friends to celebrate his life, rather than mourn his passing. A Memorial Celebration of Life will be planned in the future to honor his wishes. His love for animals, especially dogs, can be honored by donating to the Humane Society. Donations would be appreciated in Jack’s memory. Jack was one in a million and will live in our hearts forever. Cremation arrangements in care of, Jowett Funeral Home, 1634 Lapeer Avenue, Port Huron. To view the obituary and share memories, please visit www.jowettfuneraldirectors.com

John (Jack) Feehan is at peace at age 76. He passed away September 29th, 2021, at Blue Water Lodge. He is survived by his loving wife, Geraldine (Geri) who he has been married to for 46 years. Jack will be greatly missed by his family, including... View Obituary & Service Information

The family of John (Jack) Feehan created this Life Tributes page to make it easy to share your memories.

John (Jack) Feehan is at peace at age 76. He passed away September...

Send flowers to the Feehan family.