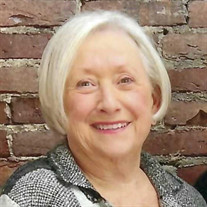 Janet Ann (McMartin) Cowley, age 73 of Fort Gratiot passed away peacefully on February 28th, 2022 in her home surrounded by her family, after a short battle with pancreatic cancer. She was born February 15, 1949 in Port Huron to the late Harry and Bette McMartin. She married Charles “Chuck” Cowley on October 25, 1968. He preceded her in death after 46 years of marriage on April 19, 2015. Janet graduated from Marysville High School in 1967. She worked at Port Huron Hospital and then opened her home to provide daycare to several children whom she loved like her own. Janet was a hard worker and very independent. She took pride in working in her yard and decorating her home. She was an avid reader, enjoyed relaxing by the pool, watching Tiger baseball, snuggling with her dog Milo and taking care of her grand pups. Without a doubt, her greatest joy was spending time with her girls and beautiful grandchildren. Her thoughtfulness, generosity and kind nature will leave a lasting imprint in the hearts of all who knew her. She will be deeply missed by her daughters, Jill (Chuck) Russell and Jodi (Jeff) Brockitt; grandchildren: Justin and Jenna Russell, Olivia and Jeffery Brockitt, and Kayla (Brent) Ogilvie; great grandchildren: Remy and Ivan Ogilvie; furbaby, Milo; brother, Pete (Jan) McMartin and sister, Barbara (Jeff) Henry, sister-in-law, Mary Ann (Robert) Sheehy, brother-in-law, Mike (Jeanette) Cowley; sister-in-law, Chris Ketelhut, and several nieces and nephews. Visiting hours will be Friday, March 4, 2022 at 10am until noon. A memorial service will be held at noon at Jowett Funeral Home, 1634 Lapeer, Port Huron. Shaun Laurain will officiate. Memorial Tributes can be made to the Blue Water Hospice or Michigan Doodle Rescue Connect. Jowett Funeral Home is privileged to assist the Cowley family with arrangements. To view the obituary and share memories, please visit www.jowettfuneraldirectors.com

Janet Ann (McMartin) Cowley, age 73 of Fort Gratiot passed away peacefully on February 28th, 2022 in her home surrounded by her family, after a short battle with pancreatic cancer. She was born February 15, 1949 in Port Huron to the late Harry... View Obituary & Service Information

The family of Janet A. Cowley created this Life Tributes page to make it easy to share your memories.

Send flowers to the Cowley family.