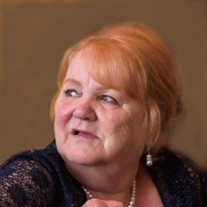 Jackie Sue Whitehead, age 72, of Port Huron Township, passed away on December 24, 2021.She was born in Oakdale, Louisiana to the late Henry and Euna (Peters) Strother. She lived the majority of her life in Texas, where she met her husband Floyd... View Obituary & Service Information

The family of Jackie S. Whitehead created this Life Tributes page to make it easy to share your memories.

Send flowers to the Whitehead family.