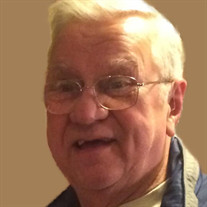 Jack M. Harrington I, age 78, of Burtchville Township, passed away in his home unexpectedly on May 2, 2021. He was born on October 21, 1942 in Detroit, Michigan to the late Earl and Augusta Harrington. He married his sweetheart Joann Leo on March 3, 1962 in Roseville. They celebrated 34 years of marriage. Jack graduated from Roseville High School Class of 1961. After graduation, he attended college. He worked at Meier Metal in Hazel Park. He is survived by his sons; Jack Harrington II (Lori) of Lexington and Jason (Tracy) Harrington of Dryden; daughters; Justine Schrader of Lakeport, Joi (Marty) Torello of Port Huron and Jodi Harrington of Summertown, Tennessee; his special friend, Shirley Guza of Burtchville; 13 grandchildren; Jack III, Jessica, Amber, Derek, Kevin, Montana, Sylvie, Samantha, Jayson, Ryan, Eric, Michael, and Maxwell. Along with 7 great-grandchildren. Jack is preceded in death by his wife, Joann in June of 1996; sister, Sharon; brother, Earl; and son in law, John Schrader. Jack was passionate about feeding wildlife around his home. He also enjoyed outings with his special friend, Shirley. He would visit Harrington Auto where he could stay connected to the auto business and have daily chats with Randy. Private funeral services will be held at 10:30 on Friday May 7 at Jowett Funeral Home, 1634 Lapeer Ave. Pastor Randy Gearhart of Living Water Fellowship will officiate. Visiting hours will be Thursday from 4pm to 8pm at the funeral home. Burial will be in Resurrection Cemetery, Clinton Township. Memorial tributes can be made to the wishes of the family. Jowett Funeral Home is privileged to assist the family with arrangements. To view the obituary and share memories, please visit www.jowettfuneraldirectors.com

Jack M. Harrington I, age 78, of Burtchville Township, passed away in his home unexpectedly on May 2, 2021. He was born on October 21, 1942 in Detroit, Michigan to the late Earl and Augusta Harrington. He married his sweetheart Joann Leo on... View Obituary & Service Information

The family of Jack M. Harrington I created this Life Tributes page to make it easy to share your memories.

Send flowers to the Harrington family.