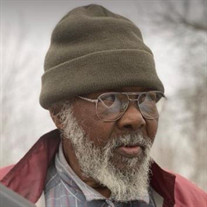 Henry “John” Jones was born July 15, 1938, to the union of the late Charlie and Jesse Ann (McSween) Jones in Hamlet N.C. There he attended Hoffman Public Schools until the age of 16. Henry left North Carolina in 1953 and made his way to New York where he stayed with his aunt Marion Troy until the need arose for him to move to Washington DC briefly before moving to Michigan where he called Smiths Creek his home. Henry worked for GM before starting his own Trucking company (Jones Trucking) as well as owning and running his own junkyard. Henry met and married Shirley M. Price and they were blessed with 9 children. Jonathan, Avis, Arthur, Anne, John Jr, Mary, Ronald, James, and Tammy. Henry cherished his grandchildren, and his great-grandchildren (29 in all). You could see his face light up with so much joy every time they would visit him. He and his family truly enjoyed spending time together cooking and laughing for the 4th of July year after year. He loved his friends and they loved and adored him also. He helped everyone he came in contact with as long as he had the ability to do so. He would give you the shirt off his back if you asked. He was an amazing and kind man. Henry lost his battle with cancer and gained his wings Tuesday August 31, 2021, at 12:40p.m. He was preceded in death by his parents (Charlie and Jesse Ann Jones), his wife (Shirley Jones), two sons (Johnathan and Ronald Jones), two sisters (Mary Jones and Myrtle Holmes), four brothers (Roland, Willie, Robert, and James Jones), a grandson (Artuan Collins), and three great-grandchildren (Christian Williams, Jordan Agnew, and Preston Griffin), He leaves to cherish his memory children: Avis, Arthur, Anne, John Jr, Mary, James (JJ), and Tammy (Darryl) his grandchildren: Chauncy, Jessica, Walter III, Shantel, Rachel, Ashley, Amber, Angelique, John III, Ayeshah, Christina, Shaniece, James Jr, De’Andre, and De’Antre, His great-grandchildren(29), his siblings: Annie Crimm & Norma Jones, Robert Boyd (Hamlet N.C.) Mary Terry (Rockingham N.C.) Charlie Jones (Omaha NE) as well as a host of great nieces and nephews. There will be a celebration of life held at Henry’s home on Friday September 10th and Saturday September 11th, 2021. Cremation arrangements in care of, Jowett Funeral Home, 1634 Lapeer Avenue, Port Huron. To view the obituary and share memories, please visit www.jowettfuneraldirectors.com

Henry &#8220;John&#8221; Jones was born July 15, 1938, to the union of the late Charlie and Jesse Ann (McSween) Jones in Hamlet N.C. There he attended Hoffman Public Schools until the age of 16. Henry left North Carolina in 1953 and made his... View Obituary & Service Information

The family of Henry "John" Jones created this Life Tributes page to make it easy to share your memories.

Send flowers to the Jones family.