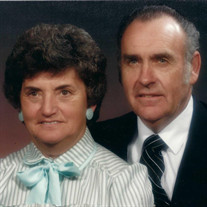 Rev. Frederick Edgar Wynkoop, age 90, of Prudenville, MI, and formerly of Pt. Huron, MI, was called home to his Lord and Savior Jesus Christ, and to reunite with his wife Wilma, on November 29th, 2021. He lived independently to the end, requiring a short hospital and nursing stay in Grayling, MI, from which he did not recover. Born the youngest of eight children to Floyd and Mary (Hunt) Wynkoop, November 10, 1931, into a Shevlin, MN, farming family, he was raised in meager circumstances and worked from a very early age. He met and married Wilma Arlene (Morrish) Wynkoop June 21, 1951, after moving to Pt. Huron to follow some older siblings who came for work. They raised two sons, Robert C. Wynkoop and Timothy F. Wynkoop. As a young man, Fred worked at Meuler Brass Company with his brothers until becoming a custom home builder. He went on to build well over a hundred local homes in the area. He also built two local churches, one being the Marysville Assembly of God where he became a member and from which he and Wilma were called into the ministry after raising their two sons. He started working with youth, eventually relocating to the north where he and Wilma eventually planted and built, debt free, two churches in the Prudenville area: the Assembly of God and the New Hope Chapel (along with congregational donations he was known to call in favors from his construction days suppliers). Fred loved to spend time with Wilma until her passing in October 2018, ministering to the needs of others until his retirement a few years ago, playing guitar and singing country Gospel, and fishing and hunting deer with Wilma. And while Fred and Wilma preceded the Flintstones, those who knew them often noted sweet similarities between their individual characteristics and their interactions with the classic cartoon series. Fred is survived by his two sons Robert C. (Bonnie) Wynkoop of Pt. Huron and Timothy F. (Barb) Wynkoop of Maumee, OH; grandchildren Ryan, Rosanna (Matt), Nichole, and Bennett; and great grandchildren Dane, Sammy, Alyssa, Hope, Graham, Leah, and Jacob. He is preceded in death by his wife of 67 years Wilma Arlene (Morrish) Wynkoop and their daughter Lisa (1969); his seven siblings, Chester (Chet), Chellas (Chell), John, Frank, Katheryne, Gertrude (Irene), and Clement (Clem); and grandson Cpt. Jonathan F. Wynkoop (U.S. Army). Viewing will be from 11:00 AM to 1:00 PM, Friday December 3, 2021, at New Hope Chapel (525 Cove Road, Prudenville, MI), followed by the service at 1:00 PM, followed by a luncheon provided by the church (which has continued to honor him in his retirement). Graveside service will be Saturday December 4, 2021, 1:00pm at Kinney Cemetery in Wadhams. Memorials should be made to your local church ministries that feed and comfort the poor and spread the good news of the Christ. Arrangements in care of, Jowett Funeral Home, 1634 Lapeer Avenue, Port Huron. To view the obituary and share memories, please visit www.jowettfuneraldirectors.com

Rev. Frederick Edgar Wynkoop, age 90, of Prudenville, MI, and formerly of Pt. Huron, MI, was called home to his Lord and Savior Jesus Christ, and to reunite with his wife Wilma, on November 29th, 2021. He lived independently to the end, requiring... View Obituary & Service Information

The family of Rev. Frederick Edgar Wynkoop created this Life Tributes page to make it easy to share your memories.

Send flowers to the Wynkoop family.