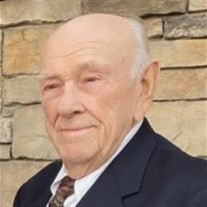 Ernest Burskey, age 87, of Clinton Township, passed away on April 11, 2022, after a brief illness. He was born on May 19, 1934, in Detroit, to the late John and Eleanor Burskey. He married Frances A. Coppola, on December 28, 1957. Ernie served proudly and honorably in the United States Army. Ernie was a handyman, who could fix just about anything. He was an easy going, go with the flow, gentleman, his motto was “Don’t Sweat the Small Stuff”. He was passionate about golfing with friends and enjoyed traveling to Las Vegas with family. He attended catholic school and was a Christian and faithful man. We know he is at home in Heaven with his loved ones that have gone before him. He is survived by his wife, Frances, children; Kathleen (Augie) Bertolino, Gregory (Shannon) Burskey, grandchildren; Lisa (Nigel) Littleton, Chris (Danielle) Bertolino and Blake Burskey, great-granddaughter, Avery Bertolino, along with several nieces and nephews. He was preceded in death by his son, Steven R. Burskey and brother, Donald Burskey. A memorial service will be held on Thursday, April 14, 2022 at 11:00am at Resurrection Cemetery, Clinton Twp., Father Jerry Slowinski will officiate. There will be a luncheon following the service. Arrangements in care of Jowett Funeral Home – 57737 Gratiot, New Haven. View obituary and share memories at www.jowettfuneraldirectors.com

The family of Ernest Burskey created this Life Tributes page to make it easy to share your memories.

Ernest Burskey, age 87, of Clinton Township, passed away on April...

Send flowers to the Burskey family.