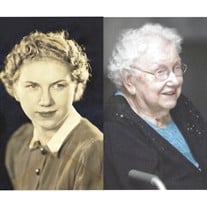 Goal reached, made it to 100! Uffda, after a 20-year battle with cancer, Elsie Zella (Olson) Melms, passed away on January 8, 2022. She was born on July 3, 1921 in Gladwin to the late Axel and Lena Olson. Elsie graduated from Sandusky High School in 1939 and later married Walter R. Melms on June 25, 1946. They resided in Goodells. Elsie called herself a professional volunteer. She was active in PTA at Ruth Bacon School, 4-H Leader, St. Clair County Farm Museum and March of Dimes. Elsie also volunteered for 14 years with Walter in the Retired Affairs office at Selfridge ANG, along with being a member and officer of VFW Post #8465 May O’Brien. She wrote a column for the Sanilac County News in Sandusky called Granny’s Kitchen from 1971-1982. With the help of her niece, Boni Huddleston of Payson, Arizona, she published a book of her articles at the age of 97. After she retired, she became a “professional procrastinator.” Elsie was an artist, crafter, seamstress, loved to crochet, and read cookbooks like a novel. She also enjoyed a good game of scrabble, even on the computer, and cake decorating. Elsie is survived by her daughter and son-in-law, Christine (Joe) Cumerlato of Wadhams, even though in her words Joe was more than that, daughter, Lorraine Vanderleun of Caseville, grandchildren, Denise (Rory) Fox, Jasen Melms, Heidi (Jim) Benner and Emily Mason, great-grandchildren, McKayla Melms, Ava and Elsie Melms, Miranda (Daniel) Armstrong, Austin Benner (fiancée, Danielle Stockwell), Brysen Cumerlato Rann, Tanner and Conner Mason, sisters-in-law, Blanch Melms and Gail Cain, 4 special friends, the “Evans Girls” Rosemary, Laura, Claudia and Sandy, along with many special nieces, nephews and friends. She was preceded in death by her husband, Staff Sgt. USAF retired Walter R. Melms, son, Walter Melms II, daughter-in-law, Judith Melms, son-in-law, Adrian Vanderleun, grandson, Jay Mason, brothers, Eugene and Elwyn along with sister, Eldora. The family would like to say a special thank you to the “Original” VNA and Blue Water Hospice for all their support and kindness to Elsie and her family and also to the “Bomb Squad” and the entire staff at Dr. Samir Alsawah’s office. In lieu of flowers, please make donations to Blue Water Hospice Home or the St. Clair County Humane Society. Elsie always signed off “Keep Smilin, Elsie Melms.” A celebration of life will be held at a later date. Burial to take place in Fort Custer National Cemetery, Battle Creek with her husband, Walter. Arrangements in care of, Jowett Funeral Home, 1634 Lapeer Avenue, Port Huron. To view the obituary and share memories, please visit www.jowettfuneraldirectors.com

Goal reached, made it to 100! Uffda, after a 20-year battle with cancer, Elsie Zella (Olson) Melms, passed away on January 8, 2022. She was born on July 3, 1921 in Gladwin to the late Axel and Lena Olson. Elsie graduated from Sandusky High School... View Obituary & Service Information

The family of Elsie Zella Melms created this Life Tributes page to make it easy to share your memories.

Send flowers to the Melms family.