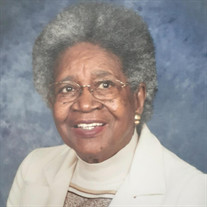 Born September 29, 1931, in Anniston, Alabama to the late Hosea and De’xer Chapman. As the oldest of six siblings, Elouia would often help take care of her younger brothers and sisters. Tasked with getting them ready for school every day, she discovered a lifelong passion for doing hair and making people feel happy and beautiful. She married Jessie Howard on August 8,1955 in Columbus, Ohio. Elouia attended Columbus, Ohio's East High School, along with receiving certification in cosmetology. She worked as a cosmetologist in Columbus, Ohio and San Jose, California for 36 years. The two most important things to Elouia, were her music and her family. She carried around her iPod everywhere and was always looking for new suggestions of songs and artists to fill it with. She would often say, the music kept her young. As much as she loved music, nothing topped family for Elouia. She lived for being around her grandchildren, great-grandchildren, and her great nieces and nephews. When asked for any words of wisdom for the next generation she replied, “I love the way I lived my life. Live with love and peace in your heart. That’s my secret to happiness.” Her reminder and Quote to leave you with " Watch out for those Wooden Nickels." She is survived by her two sons David Howard and Jessie Howard Jr., sister in-law Delores M. Chapman, many nieces and nephews, Patsy Chapman, Winslow Chapman, De'xer (Thurston) Chapman Johnson, James (Pattie) Chapman, David Chapman, John (Shelly) Chapman, Eugene (Henrietta) Henderson and Diantha Henderson, grandchildren and great-grandchildren and many other relatives and friends. She was preceded in death by husband Jessie Howard Sr., two brothers; Willis C. Chapman, Samuel L. Chapman and three sisters; Rosalind Chapman, Edith Henderson and Marilyn Chapman. Arrangements in care of Jowett Funeral Home - 1634 Lapeer Avenue, Port Huron View obituary and share memories at www.jowettfuneraldirectors.com

Born September 29, 1931, in Anniston, Alabama to the late Hosea and De&#8217;xer Chapman. As the oldest of six siblings, Elouia would often help take care of her younger brothers and sisters. Tasked with getting them ready for school every day,... View Obituary & Service Information

The family of Elouia Howard created this Life Tributes page to make it easy to share your memories.

Send flowers to the Howard family.