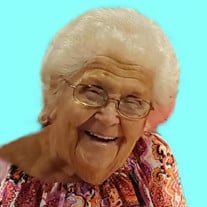 Eleanor M. O’Connor, age 89, peacefully entered eternal life in Croswell on April 22, 2021 with her family by her side. She was born on August 16, 1931 in Buel Township. She married William O’Connor on March 7, 1956, who preceded her in death on July 14,2020. Eleanor is the daughter of the late Russell and Mable Miller. Eleanor was a graduate of Croswell Lexington High School Class of 1949. Following High School she worked as a telephone operator for Michigan Bell. She worked there until they went direct dial. She loved it there and could tell you anyone's number. Eleanor then became the manager of the Family Business Croswell Stockyards until she retired. This still remains a family legacy that both her and Bill worked together on! Eleanor was a life long member of the Croswell Wesleyan Church. She was in the choir and a part of many Christmas Musicals there. She was also a greeter where she welcomed everyone with her special hugs! Because of her strong faith and love for Jesus, Ellie knew she was going to Heaven. What a tremendous peace she has given to those she has left behind. Grandma Ellie was the most well known person in Croswell. She attended many sporting events throughout her later years to support her grandchildren and great-grandchildren. And, also to give her love to the community. She was an inspiration to all who knew her and will be desperately missed. Lives will forever be changed because of Grandma Ellie. Eleanor is survived by her children; Stephen (Linda) Hosterman, Randy (Catherine) O’Connor, Deborah (Randy) Swecker, Sarah (Fred) Kading, James O’Connor, and Donald O’Connor; also, survived by 21 grandchildren, 34 great-grandchildren, and 3 great-great grandchildren. She is preceded in death by her son, Jerry L. Hosterman; grandson, Michael R. Schmidt; brothers; William Miller, Robert (Pauline) Miller, and Paul Miller; sister, Barbara (William) Boyd. A memorial service to celebrate and honor Grandma Ellie's life will be held on Sunday, June 13th at 2:00pm at 3725 Old 51, Croswell, with a dinner to follow. Cremation arrangements are in the care of the Jowett Funeral Home, 1634 Lapeer Ave, Port Huron. Memorial tributes can be made to Athletic Department of Croswell-Lexington Schools. Jowett Funeral Home is privileged to assist the family with arrangements. To view the obituary and share memories, please visit www.jowettfuneraldirectors.com

The family of Eleanor M. O'Connor created this Life Tributes page to make it easy to share your memories.

Send flowers to the O'Connor family.