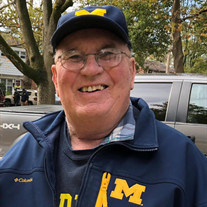 PORT HURON- David Edgar Shook, age 83, of Port Huron, passed away peacefully at Marwood Nursing and Rehab on Monday, November 8, 2021. Born on June 22, 1938 in Detroit, Michigan, David’s K-12 schooling was with the Detroit Public Schools, In his early years, he spent lots of time collecting, handling, and raising creatures such as tadpoles, frogs, toads, spiders, grasshoppers, and had bad encounters with bees and snakes. David loved school even though his behavior in and around school was not the best, but teachers took him under their wings, so to say. In the 10th grade, David decided that High School Biology teaching was his goal in life and never wandered away from his goal. In 1957 David went off to Albion College, majored in biology, and was a member of Tau Kappa Epsilon (National Fraternity and well into retirement participated in the Teke Board of Advisors, Committee of Alumni, working with and helping guide the Omega Chapter Active Teke’s. Secondary teacher training was part of David’s studies at Albion. After Albion College in 1967, David was off to Eastern Michigan University and was the first to begin and finish their new degree as “Master of Science in Biology”. David’s thesis was on Daddy-Long Legs of Washtenaw County. Then, David was off to The University of Michigan for post-graduate studies with additional course work at Wayne State University and Central Michigan University. In 1963 David was financially broke, so he returned to Detroit to teach in biology and science. He was hired immediately and enjoyed three years of employment with the Detroit Public Schools. In the spring of 1966 David received a call from a past Professor and friend that had guided his graduate committee and research. He asked David if he would be interest in teaching at a Junior College. David said, “he would be happy to look into it”. Well, to make a long story short, it took five minute for David to get hired, at then the Port Huron Junior College, which was at the time, part of the Port Huron Area School District. The following year the college went county-wide in financial support, becoming St Clair County Community College. It was David, that coined the term SC4 and to this day, that logo still remains! Proudly, David left his mark! After 31 years at SC4, David retired on a buy-out at the end of 1996. He advised, they offered him a financial package he could not refuse. David joined Port Huron South Park Lions in 1982, District 11-D2. His Lions pin reads, Past President and has a chevron noting 27 years of perfect participation. He was on the 11-D2 Cabinet in 1987-88, served as Zone Chairman and he had served the club as Tail Twister, Lion Trainer and also Lion of the Year in 1988-89. At David’s club, their installation of officers meeting in June, 2009, David was greatly honored with an award presented to him, The Melvin Jones Fellow for Dedicated Humanitarian Services Lions Clubs International Foundation. David was extremely proud of this award and had the plaque displayed prominently in his home. David was also a Mason, served as Master in 1993, and was Mason of the Year for Pine Grove Masonic Lodge #11 F&AM, in 1996 and again in 2005 with the Marysville Masonic Lodge. For many years David was Tiler of his lodge and greeted with “Boundless Enthusiasm”. Education was instrumental throughout David’s life therefore it was very fitting for him to initiate and spearhead the Pine Grove #11 Scholarship Fund. David was part of the selection process, offering a college student a scholarship who showed both promise and need. David had memberships in several affiliated masonic organization such as Royal Arch, Council Commandery of Knights Templar, Scottish Rite 32°, North Grotto, and Moslem Temple Shriners; helping with all their philanthropies. David was one of three in the State of Michigan to be selected for the Knights Templar Meritorious Award. Locally in Port Huron, David was a member of the Port Huron International Club since 1967. Members traveled extensively, occasionally helping with language barriers at the Blue Water Bridge, host Exchange Students, assist with English skills for immigrants, and promote cultural exchange and understanding. David was President of the Port Huron International Club, twice. Besides being a member of various clubs and organizations, David had many interests including dogs, Harley Davidson Motorcycles, walleye fishing off his dock on the St. Clair River, travel, and anything pertaining to biology. David was an avid University of Michigan fan, especially Michigan football, carrying season tickets for over 30 years. David is forever remembered and loved by close family friends, Cliff and Terri Amey along with their three children: Calvin (Alex), Connor, and Olivia Amey. David was preceded in death by his loving parents, James and Rita Shook, a few Doberman Pinchers and his last two Bull Terriers, Liam and Sammy. In honor of David, there will be a Masonic Funeral at the Marysville Masonic Temple, 1569 Michigan Ave., Marysville, MI 48040 on Saturday, December 4. 11 am-1 pm fellowship gathering; 1 pm Masonic Funeral. Donations can be made in memory of David to Pine Grove #11 Scholarship Fund, PO Box 610315, Port Huron, MI 48061. Arrangements in care of Jowett Funeral Home, 1634 Lapeer Avenue, Port Huron. To view the obituary and share memories, please visit www.jowettfuneraldirectors.com In David’s loudest, boisterous voice: Go Blue!

The family of David Edgar Shook created this Life Tributes page to make it easy to share your memories.

Send flowers to the Shook family.