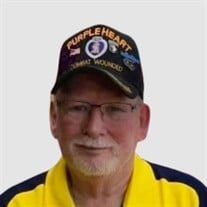 Not sure what to send?

Dan R. Burbeula, age 76, of Chesterfield Twp, passed away on April 30, 2022, with his family by his side. He was born on May 16, 1945, in Detroit, to the late Bernard and Virginia Burbeula. He married Kathleen Carroll on October 18, 1969, in Detroit. Dan served honorably in the United States Army, in the 101st Airborne and was the recipient of the Purple Heart and Bronze Star awards. He was a former police officer and Chief of Police for Chesterfield Twp. Dan was lifetime member of the Lempke-Blackwell VFW Post 7573. He loved traveling, golfing, and going up north. Dan was a loving husband, father, and grandfather. He is survived by his loving wife, Kathy, daughter, Heather (Tim) Bade and son, Justin (Cindy Jones), grandchildren; Addison (Crystal) Bade, Max (Normandy) Bade, Spencer Bade and Grace Bade, great grandchildren; Esther Bade and Landen, siblings; Roger (Bernadette) Burbeula, Nancy Burbeula and Leonard Burbeula, brother-in-law, Robert Carroll, along with several nieces and nephews. He was preceded in death by his brothers; Kenneth Burbeula and Ronald Burbeula. A Celebration of Life will be held on Friday, May 20, 2022 starting at 4:00pm in the Lempke-Blackwell VFW Post 7573 – 35011 23 Mile Road, New Baltimore. Military honors will take place promptly at 5:30pm, with a dinner to follow. Arrangements in care of Jowett Funeral Home – New Haven.

The family of Dan R. Burbeula created this Life Tributes page to make it easy to share your memories.