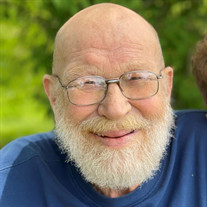 Clarence G. "Jr" Miller Jr., age 70, of Kimball Township, passed away on February 18, 2022. He was born on May 4, 1951, in Port Huron. He married Marsha K. Oliver on May 8, 1970, in Port Huron. Jr retired from the Grand Trunk Western Railroad, after 34 years of service. He enjoyed spending time at the cabin, in Farwell, and hunting - deer and turkey. He also enjoyed fishing and time with his family. He was an avid Detroit Red Wings fan. Jr was a loving husband, father, grandfather and brother. He is survived by his wife, Marsha, daughter, Tracy (Anthony) DuPree, son, Brian Miller, grandchildren; Brian Miller Jr., Isabella Miller, Carlee Miller, and Jalen McLaughlin, siblings; Philip (Nicole) Miller, Crystal (Gerald) Stoner, Marrie (Dan) Blackwell and Kelly Clark, along with several nieces and nephews. He was preceded in death by his father and step-mother, Clarence and Nora Miller, mother and step-father, Barbara (Alcorn) and Thomas Hering, and a sister, Dawn Lier. Visiting will be Wednesday, February 23, 2022 from 2:00pm until 6:00pm in the Jowett Funeral Home - 1634 Lapeer Ave. Port Huron. Memorial tributes can be made to M.P.N. Research Foundation.

The family of Clarence G. "Jr" Miller Jr. created this Life Tributes page to make it easy to share your memories.

Send flowers to the Miller family.