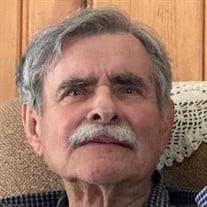 Charles Dell Pedigo, 89, of Burtchville, passed away. Saturday February 19, 2022. He was born January 2, 1933 in Algonac. He grew up in several towns including Peck, St. Clair, Richmond, Memphis and Armada. Charles married his high school sweetheart, Dorothy D. Simons, on November 18, 1950. They were married 70 years. Charles was a dry-cleaner by trade while he and Dorothy also purchased and renovated several homes in Armada. In 1970 they moved to Owosso and opened their own business, Charles Cleaners. They eventually settled in the Port Huron and spent the remainder of their lives in and around the area. Charles is survived by two children, Craig Pedigo (Erna), Wales Township; and Patricia DeSanti (Roger), Marietta, Georgia; four grandchildren, Elizabeth Stover (Chris); Michael Pedigo; Roger DeSanti, Jr., and Alyssa DeSanti; and two great grandsons, Bennett and Nicholas Stover. He was preceded in death by his parents, Clarence and Beatrice (Arnold) Pedigo; his wife, Dorothy D. (Simons) Pedigo; a son, Michael; three sisters, Ruth, Jean, and Helen; and two brothers, William and Floyd. A Celebration of Life will be held at a time and date to be announced later this spring Arrangements in care of Jowett Funeral Home - 1634 Lapeer Ave. Port Huron. View obituary and share memories at www.jowettfuneralhome.com

The family of Charles D. Pedigo created this Life Tributes page to make it easy to share your memories.

Send flowers to the Pedigo family.