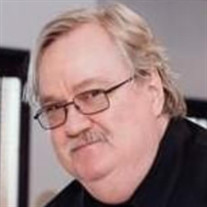 Allen S. Heaslip, age 60, of New Haven, passed away on January 18, 2022. He was born on September 2, 1961, in Highland Park, to the late William and Eileen Heaslip. He married Dorothy L. Wallace on August 1, 1987, in Detroit. Allen enjoyed hunting and making and painting model cars. He enjoyed drinking his Jack and Cherry Coke, and spending time with his family and friends. He is survived by his wife, Dorothy, daughters; Brittany (Jordan) Folson and Shannon Heaslip, 3 grandsons; Nolan, Rowan and Bodhi, sibling; Corky Lefler, Brian Heaslip, and David Heaslip, mother-in-law, Regina Wallace, brothers-in-law; Kenneth Wallace and Robert Wallace, along with several nieces and nephews. He was preceded in death by his father-in-law, Don Wallace and brother-in-law, Tim Wallace. A Celebration of Life will be held on Tuesday, February 1, 2022 from 2:00pm - 5:00pm in the Jowett Funeral Home - 57737 Gratiot, New Haven. Memorial contributions can be made to the wishes of the family.

The family of Allen S. Heaslip created this Life Tributes page to make it easy to share your memories.

Send flowers to the Heaslip family.